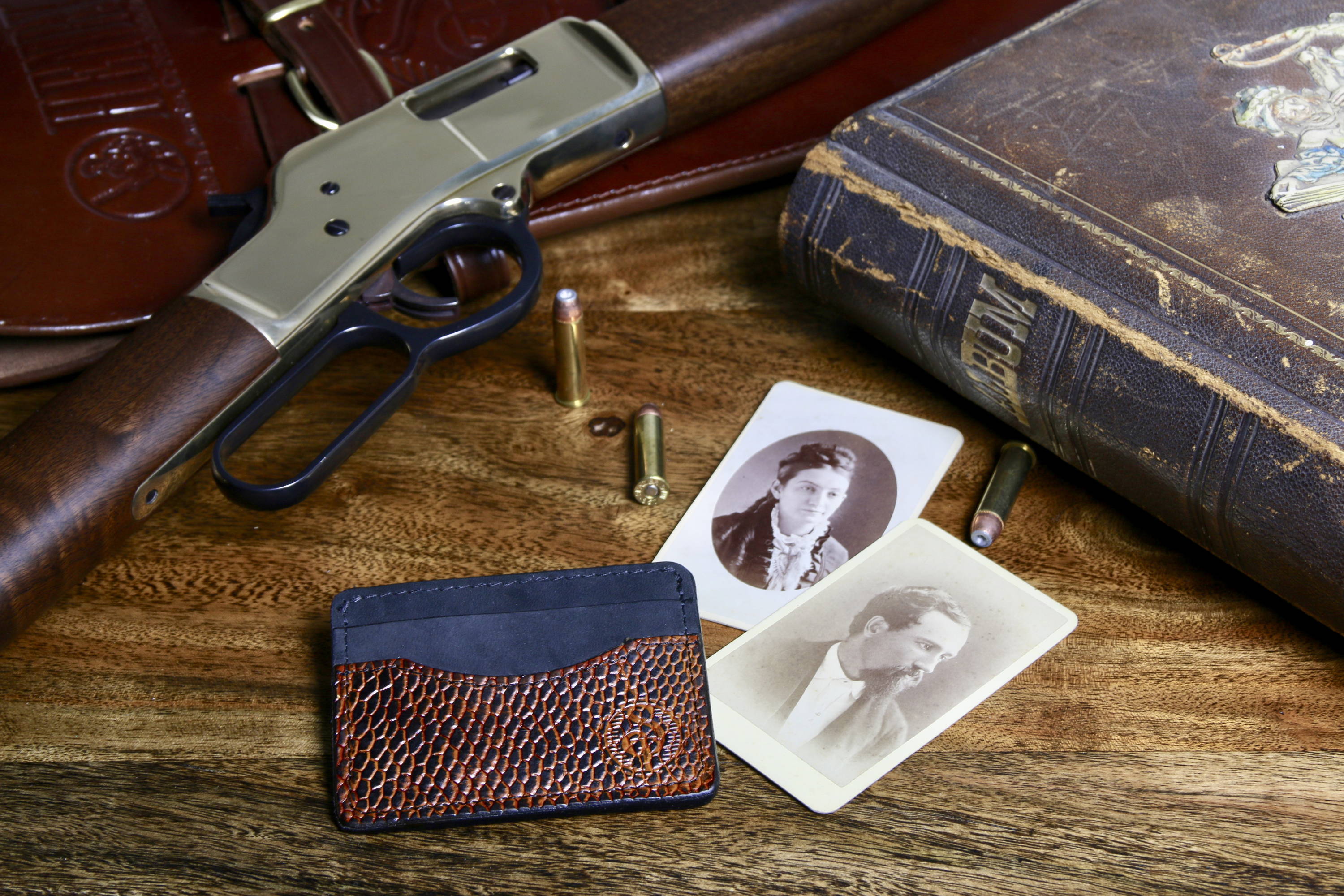 This wallet is named after the infamous First Mate fiasco that caused a big mess in the workshop and is comprised of hand selected North American Beaver Tail.

Here's the story if you missed it - "My First Mate made a mistake that would change Southern Trapper forever. He thought it would be funny to play a prank on me, but he accidentally knocked over a bottle of black dye onto a light tan alligator skin that I had just finished dying. I must have dropped every cuss word in the book. He reached for a cloth to soak up the dye before it quickly spread across the entire alligator, but it was too late. The black dye had left its mark. A handsome mark with deep character that I quickly began to like. The contrasting tones brought out the texture and masculinity of the alligator, and I knew he was onto something great. Instead of asking him to scrub the poop deck, I asked him to fire up the sewing machine and make a few wallets. His mistake earned him a spot in my Legendary Tales collection, meet The First Mate" - Capt Bligh

Dimensions - This wallet is 4 inches wide by 3 inches tall.

The North Pole is not the only place with a magical workshop - Discover the tale of Southern Trapper and the magical craftsmen behind it.

Our philosophy is simple - Exceed your expectations no matter the cost. We'll never mass-produce, we'll never sacrifice quality, and nothing will ever leave our shop unless we're certain it will last 100 years. Every piece of leather is built with pride and integrity to provide a lifetime of satisfaction. We're so confident in our talented craftsmen, durable materials, and outstanding designs, that we warranty them against workmanship for 100 years.

When your guard is down, this wallet has you covered. Our wallets are lined with an advanced metal fabric that prevents radio waves from penetrating the wallet walls. Our highly conductive RFID-blocking wallets are made from the same technology used to protect astronauts in space.

This credit card wallet has two compartments on each side and a hidden center compartment for cash & business cards. Once broken in, each compartment will hold up to 4 cards, allowing you to carry 20 cards. For a minimalist wallet, this wallet has outstanding functional capacity.

Made from the finest genuine leather, this wallet is full of character, like many of the gentlemen we proudly serve. The soft and durable leather makes for a comfortable and reliable wallet. No more frayed edges or torn seams, this wallet is ready to outlast all that has come before.

There are few things that you’ll never let go of or forget, such as memories and time-proven leather. We hope you use our soft and durable leather goods to create memories in the wild that you’ll carry with you everywhere you go. Memories of times spent smoking venison or wild-hog bbq with your family and ole hunt’n buddies. Often times, it’s memories like these that are harder to procure than the wild hides themselves.

We coat our wallets with a non-toxic damage-resistant sealant to increase its longevity. The marine grade resistant finish provides protection against rain, sleet, and snow. You’ll fall in love with this leather wallet, which ages with a natural patina that will enhance with wear.

As stewards of the land, we share your same values for proficiently using all byproducts in humane and ethical ways. Our wild hides are sustainably sourced and humanely harvested across the country from hunters and trappers. The texture of our wallets are as rich in character as the landscapes these animals are native to, and we’re committed to ensuring their flourishing future.

Made With Pride in the USA...

We never sacrifice quality and never mass produce - Nothing profoundly satisfying happens overnight, including our wallets. Our team of master craftsmen delicately handcraft each wallet entirely by hand. While you may think we’re out fishing, we’re actually meticulously perfecting your wallet to ensure it provides generational satisfaction. Your grandkids will enjoy it as much as you did.

Field tested by Dads, Cowboys, Professional Athletes, Game Wardens, and by our nation’s War Hero's, our collections will outlast and outperform all. Like a great hunting dog, our wallets are there when you need them. We’ve spent months in development by spending weeks in the duck blind, days in deer stand, and weekends on the river, all to ensure each product will withstand a lifetime of abuse.

After a short break-in period our card holders will hold 3 cards in each slot, for a total of 12 cards. There is also a central slot for cash.

If you would like your wallet personalized we will emboss your initials on the main front pocket of the card holder.

All wallet orders will ship within 24 hours, even if you request to have your initials embossed. We do not ship on Saturday and Sundays. We offer free USPS First Class (4-5 Day) shipping, or you can choose an expedited service through USPS or UPS.

You can return your unused wallet for any reason within 30 days of purchasing. If you receive the wallet as a gift, we will honor the return policy without a receipt. Personalized wallets cannot be returned or exchanged, however they are still covered under our 100-year warranty.